June 16 marks the next release from Peter Kersten under his humble Lawrence alias. ‘Blue Mountain’ once again finds the perfect balance between poignant house, washes of ambiences all tied together with the structural backbone of Detroit techno. However, for listeners familiar with Kersten’s career, spanning almost two decades now, it would be vacuous to lump his production into genres, especially considering Kersten has noted that core values of Dial were never to be caught up in a specific style of dance music.
“I think it’s always journalist who would try to stylise Dial in a certain way, but i think it’s only the people who are releasing & running the label who can create these thoughts”.

With every review, interview & feature documenting the many facets of Kersten’s life; production, three labels, a record store & most recently Mathew Gallery, co-owned with David Lieske, you could be forgiven for unintentionally writing an essay on just one of the former. Furthermore, Hamburg’s prolific, yet modest electronic music history in which Kersten was immersed in from the late 80’s, would respectfully require a thesis length analysis to properly portray its story. In an effort to succinctly document aspects of the past & discuss what has already been (another) remarkable year, Kersten took the time to answer some questions we had about his career.

In 1994 you met Dixon who you’ve mentioned influenced your taste in the deepest house sounds; what was the underground scene in Hamburg like during the 90’s?
The mid-90’s house music scene in Hamburg was rather New York Vocal House, Berlin was mainly a Techno city, so Dixon and myself were part of the very few pioneers of Deephouse, digging for Theo Parrish, early Herbert works, Nick Holder and stuff. Somehow Dixon and me got connected through a common friend, Peter Krell who ran these underground parties in Hamburg, Berlin and Paris. We once played at a “Paris Is Burning” party at the Queens alongside Ben Klock and Jef K, who was also a massive influence too.

Tell us a bit about the ‘Front’ Club.
The Front was the best club in the world, a prototype which influenced the Robert Johnson regarding sound and lighting. When I went there in 1988 for the first time I was immediately addicted to the club, music, people. The resident DJ, Boris Dlugosch, was maybe the most influential person in my whole life.

Do you feel that Hamburg & Cologne’s rich history in electronic music has often been overlooked or under appreciated due to Berlin?
I would rather say that these scenes never intended to get higher attention or being popular in any global regard. All influential clubs were kind of hermetic microcosms and mythic beings.

I’ve noticed in numerous articles that Hamburg natives are described as having a mixture of ‘grumpy humour’, an element of left wing activism with an emphasis on art & music culture. Would you consider this as an accurate portrayal?
Oh that’s an interesting theory- but I experienced people that are into left wing activism as always very serious and having a lot of fun at the same time, rather not being grumpy. But of course a lot of people in Berlin and Hamburg are super grumpy, actually i’m not so much into it.

The origins of Smallville Records in Hamburg appeared to have happened organically; Julius, Stella & yourself opened the store back in 2005, then the label followed one year later.
Are you able to tell us how it all unfolded at the beginning?
The idea of a “good” record store was more of a running party gag between Stella, Julius and me. Like some romantic dream. It was all about the location i guess, we just had to find it and fill it with content. So one day it was there- and the best thing about it was that our friends built up a restaurant next door, “Brachmann’s Galeron”.

The aesthetic side to Dial, Laid & Smallville is nothing short of flawless. Each label has their own unique representation & style in their own right; so It’s no surprise that you co run Mathew Gallery in Berlin with David Lieske. Are you able to explain a little bit of history behind not only the gallery but your personal philosophy behind art & music aesthetics?
It’s really not easy to think about the philosophy behind all the hundreds of projects we did. At least there’s a great quantity of crazyness needed to start all these things, hahaha.

How did the relationship between Smallville & Stefan Marx happen?
Stefan was one of Stella’s best friends when we started Smallville. His first Idea was to do the record shop logo in this french fries typography, which i didn’t like at all. Now Stefan Marx is the only artist I accept playing some records at the openings. 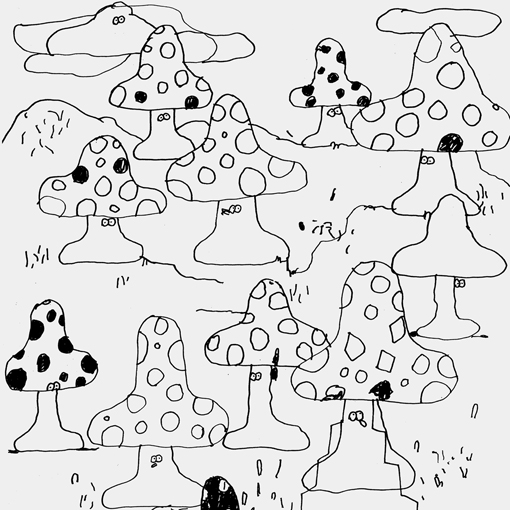 Do you think there is any correlation between your interest in art & your short venture into gardening & gardening architecture? The latter appears to often be over looked at times as an art form.
The only correlation i would see here is that i’m quite good at crafts and building up things. At the gallery it helps of course installing an exhibition.

You mentioned that Hendrik Weber (Pantha Du Prince) & Philip Sollmann (Efdemin) introduced you into the world of drone music. For many people it’s a hard concept to grasp, what would you suggest to be the best way for listeners to start their drone education; environment, artist or otherwise.
What makes it really hard to get into drone music is that nowadays people aren’t able to listen to music for a longer time anymore. Drone music is all about time and room. So a proper performance or drone installation is needed to really come along with it- i would suggest a visit of the Dream House by La Monte Young & Marian Zazeela.

‘Kurama’ from your latest album Films & Windows uses a sample from a Japanese railway station. LIke Sollmann do you also have an affinity with Japan?
Japan is somehow the perfect place to travel when you’re sick of Europe. I went there many times and my friend Toshiya Kawasaki from Mule Musiq teaches me all about food and wine. In addition, the club people from Japan always have the ambition to set up the perfect party.

The feedback from ‘Decay’ has been phenomenal, were you close with the project during production or did you only hear the final product?
I travelled to Kyoto last year to listen to the album when it was about the final version. I remember being super exhausted from some former sake excess and Phillip being very nervous- so it wasn’t a convenient situation at all. But from the first few bars the sound captured me and i realized ‘Decay’ being one of the best techno albums ever.

Are you able to say anything about Roman Flügel’s new work?
For me it’s somehow the essence of Roman Flügel.

What will your tour schedule be like for June?
June will be quite busy, playing Lente Kabinet in Amsterdam alongside Tama Sumo, Theo Parrish, Efdemin, Fred P, then a Dial Allnighter at beloved Fabric Club, afterwards Mathew Gallery will present Megan Francis Sullivan for a grand solo show, Liste Basel art fair is calling and we have another Dial Allnighter at Uebel & Gefährlich in Hamburg on 21at June. All sounds like fun!

Are there any records currently in your bag that you would like to share?
I really love all the recent Mule Musiq 10 years releases featuring Roman Flügel, John Roberts, Julius Steinhoff – who’s lovely solo debut album (Flocking Behaviour) will be released in July. There is one record i am looking forward to since Underground Resistance published this “coming soon” video in August 2013 on Youtube and it has never been released: Timeline – “Conscious Dream”.

Lawrence will showcase his live set along with a separate DJ set for the Dial Records Showcase at Fabric this Saturday, alongside Roman Flügel & John Roberts

View all posts by bytheinch